We recently attended a family Christmas party.  My husband and I decided that we would make a homemade gift that we hope the recipents will enjoy.  It started with us making a ton of these wool dryer balls.  My hands cramped while making them so it took awhile.  We made over 30.  it’s important that it’s 100 % wool or else it won’t felt.  eventually these will be wool balls and not wool yarn balls.  with each dryer use and felting continues. 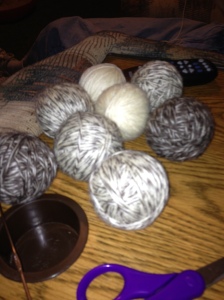 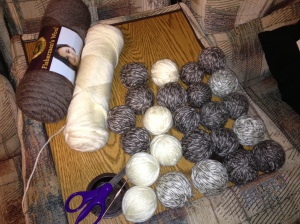 We also made liquid fabric softener, laundry soap and color catchers.  I found these cute little bottles on amazon – 4 and 8 ounce bottles.

Love the way the way the labels look – the gray back of the label however makes the soap and softener look gray though. 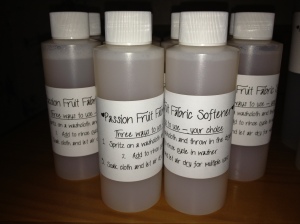 the font is Live Laugh Love by Vanessa Bays – found it at dafont.com.  I love it – it’s fun and super pretty. 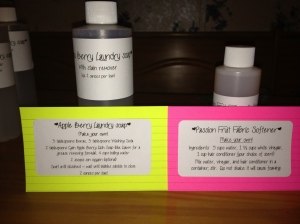 we including these bright index cards with the recipe should the recipents want to make their own.

these wonderful recipes were found at One Good Thing by Jillee

So I realized that there are tons of things to write about but I’m missing something (motivation maybe) that causes me to write.  I’ve learned alot about myself recently – they are blog entries of their own.  One thing however that I learned is I don’t really know what I love to do – hobbies, work, things to fill up by spare time.  I also realized that DIY most possibly is the one thing that causes a strong interest to start to well up.  Especially DIY for cleaning products which is hilarious to me because I’m not one of those super clean OCD folks.  OCD sucks and it affects us all differently – I hate to touch anything dirty so once my house gets dirty I’m screwed.  I also really hate not knowing what’s in all the products that we use.  I realized that I LOVE my homemade products – not only because I know what’s in them but because they actually work.

The last time I wrote it was about my daughter and I making laundry products.  Here is my rundown or progress report:

The homemade stain remover made with Dawn, ammonia, baking soda and water – I would probably grade it a C.  My daughter and I grabbed the large pile of stained clothing that I had been accumulating and treated them all to the stain remover.  Again as some of the stains were well set I couldn’t judge it by that.  It helped some of the clothes but not all of them.  I wound up throwing away several of our shirts including two of my favorites as the stains just didn’t budge.

Determined not to judge it on that pile I continued to use it.  It gunked up the spray bottle and the baking soda has taken up permanent residence in the bottom of the bottle.  Now I shake it and pour it directly on the stain.  My daughter’s favorite shirt is a stain magnet.  I treated the offending mark and let the shirt sit.  I washed it but the stain didn’t come out so I treated again and used my trusty Rubba Scrubba.  It came out and the day was saved!

The homemade laundry soap scored an A+.  I absolutely love this stuff!  LOVE IT!  I don’t think I’ll ever switch back to a commercial laundry product again.  Borax, washing soda, dish soap and sun oxygen with some hot water made a truly fantastic laundry soap.  Our clothes are clean and smell great.  My husband even loves it.  I recommend it wholeheartedly and will probably not make the powdered mix again as this doesn’t leave any occasional residue on our clothes.

Now the homemade fabric softener – I think I have never been a fan of liquid fabric softener.  A few times when I’ve used this I’ve had a rewash an item or two because of white marks left on the clothing from the softener.  This has been a problem I’ve encountered frequently with the commercial liquid softener added to the wash.  The marks on the clothing quickly have me running back to the sheets.  I would give this product a B though.  I bought a pack of white washcloths from Wal-Mart and have one at the dryer.  I’ll spray this down and throw it in.  It seems to work better than my trusty fabric sheets however it’s more time consuming (about 10 seconds more) then just grabbing one of the lavender scented ones still hanging out on the dryer.  When I run out of them though I’m probably not buying new.

I’ve also made my own Wool dryer balls!  Now I love these – a definate A for them.  I’m not seeing the full effect as it’s recommended that you use at least 4 balls per load and my daughter claimed two for herself.  I found that if I spray the fabric softener on these that my clothes smell great and they are definately soft.

So my husband decided that this year for christmas we are making everyone wool dryer balls so we picked up the yarn from Michael’s and I’ve been rolling the yarn so I can felt it.  His thoughts were that we could put all the balls in a bowl and let everyone pick the four they want.  Now this is a great idea as these are so expensive to buy.  I decided to order a case of empty 4 oz plastic bottles and 8 oz plastic bottles and will be including 4 ozs of homemade fabric softener and 8 oz of homemade laundry soap along with the wool dryer balls.  I figured 4 loads worth of laundry soap and a decent portion of fabric softener with these beautiful reusable dryer balls seem like a really great Christmas gift that will actually be used and not turn into wasted clutter.

My daughter and I made a large amount of finger paints for me to use with my kiddos at work.  It was very easy and the end product was acceptable and kid approved.

For large batches of finger paint (picture above shows 3 batches)

The recipe I follow states to refridgerate this – what I love about this recipe is that it cleans up easy.  It wipes off kids skin super easy without staining the skin.  If children eat it they will be okay as it’s just flour, salt and water with a little bit of food dye.  It does not have a pleasant taste so they won’t eat much of it if they do.

My daughter had a great time with me deciding on the colors and then she helped with the activity with a group of kids.  I use freezer paper as it has that lovely waxy side so the wet paint doesn’t soak right through.  Freezer paper also is a long roll of paper perfect for a variety of craft and art projects.

Here’s the link to the blog for the finger paints – http://www.icanteachmychild.com/2011/06/squeezable-homemade-finger-paint/

I found a new recipe to try out when I get the chance!

Mix it all together and put into a squeeze bottle or  mini spray bottle.